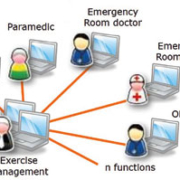 A Mass Casualty Incident (MCI) results in many casualties that require extraordinary care which has to be completely managed with the resources available within the area where the event occurred. In such a crisis situation, hospitals are the centre of medical response and an integral part of the total medical capacity of the community affected. Hospitals must be ready to accommodate a sudden influx of patients requiring care around the clock, every day of the year.

Given this scenario, many pertinent questions arise. Are we ready to cope with such scenarios? How prepared are we? How long do we need to be ready before an incident occurs that could lead to a great many acutely injured and/or ill patients?

To better understand the role of preparedness, it is necessary to define the concept of ‘surge’, which is the sizeable increase in demand for resources compared with a baseline demand. In healthcare, surge leads to a huge rise in demand for medical and public health resources [1]. Surge also describes the limits of a healthcare system to suddenly expand its ability beyond normal services to meet the bigger demand for qualified medical staff and services during a major event.

The aim is to take care of the maximum number of victims and reduce physical sequelae and mental traumas. In theory, a surge system has the following components: supplies, personnel, physical spaces, and management infrastructure, often referenced to as the 3S (stuff, staff and system) [2,3]. In other words, the hospital surge capacity is based on critical benchmarks and sentinel indicators that are related to its various components. These benchmarks and indicators allow the hospital to better estimate the immediate needs in case of a large influx of patients [4].

Tools to train for a disaster
Simulation, using table-top, electronic and full-scale exercises of MCIs are recognised as useful methods to assess performance, test plans, and investigate the efficiency of surge capacity. To help with these tasks, our research groups collaborated to develop two different simulation tools to be used for education and training in pre- and in-hospital preparedness. They are the Interactive Simulation Exercises of Emergencies (ISEE)