Recently published research [1] provides new hope for a potential cure for the devastating cystic fibrosis disease. In the study, a research collaboration demonstrated how they corrected mutations that cause cystic fibrosis in cultured human stem cells using a CRISPR/Cas9 variant technique called prime editing to replace the ‘faulty’ piece of DNA with a healthy piece. They also demonstrated that prime editing is safer than the conventional CRISPR/Cas9 technique.

The researchers from the group of Hans Clevers (Hubrecht Institute) in collaboration with UMC Utrecht and the Oncode Institute published their findings in Life Science Alliance on August 9. They commented: “We have for the first time demonstrated that this technique really works and can be safely applied in human stem cells to correct cystic fibrosis.”

Cystic fibrosis (CF) is one of the most prevalent genetic diseases worldwide and has grave consequences for the patient. The mucus in the lungs, throat and intestines is sticky and thick, which causes blockages in organs. Although treatments are available to dilute the mucus and prevent inflammations, CF is not yet curable. This study offers new hope for these patients.

The researchers succeeded in correcting the mutations that cause CF in human intestinal organoids. These organoids, also called mini-organs, are tiny 3D structures that mimic the intestinal function of patients with CF. They were previously developed by the same research group from stem cells of patients with CF and stored in a biobank in Utrecht. For the study, a technique named prime editing was used to replace the piece of mutated DNA that causes CF with a healthy piece of DNA in these organoids.

Prime editing is a newer version of the better-known gene editing technique CRISPR/Cas9. CRISPR/Cas9 cuts the DNA before correcting it. Although this corrects the mutated piece of DNA, it also causes damage in other regions in the genome.

“In our study, prime editing proves to be a safer technique than the conventional CRISPR/Cas9. It can build in a new piece of DNA without causing damage elsewhere in the DNA. That makes the technique promising for application in patients,” said first author on the publication Maarten Geurts of the Hubrecht Institute, Royal Netherlands Academy of Arts and Sciences and University Medical Center Utrecht, the Netherlands. 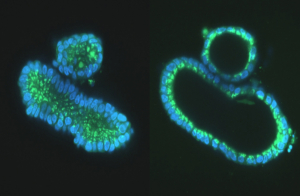 The mutations that cause CF are localized in the CFTR channel, which is present in the cells of various organs including the lungs. Due to the mutations, the channel does not function properly, leaving the layer of mucus that covers the cells with too little water: the mucus becomes sticky. The addition of a substance called forskolin causes healthy organoids to swell, but this does not happen in organoids with mutations in the CFTR channel.

“We applied prime editing to the mutations, after which the treated organoids demonstrated the same response as the healthy organoids: they became swollen. That provided us with proof that our technique worked and replaced the mutated DNA,” Geurts explained.

Now that the researchers showed that the mutations that cause CF can be safely corrected, applications in the clinic come one step closer. “New variants of CRISPR/Cas9, such as prime editing, can safely correct mutations without causing damage in other regions of the DNA. This will hopefully enable us to cure or even prevent genetic diseases in the future,” Geurts said. But before that, some challenges still lie ahead for the researchers. The technique for example still needs to be adapted for safe use in humans. “But this is a great step towards successfully applying prime editing in the clinic,” Geurts added. 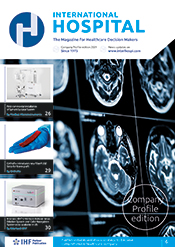